Surveying with the Maasai 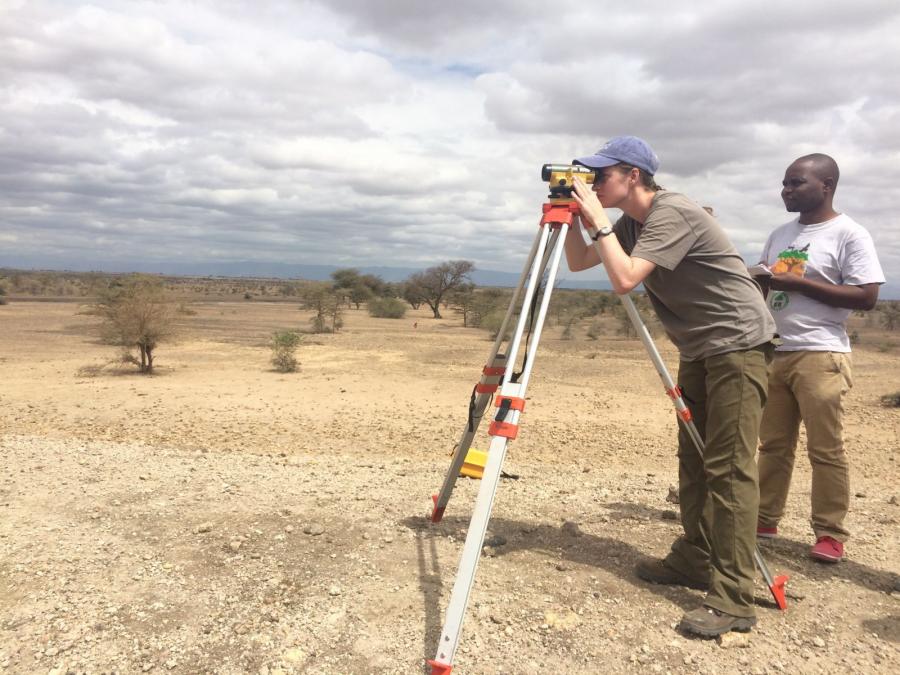 When we first saw Dave’s surveying equipment at the airport – a tall, skinny bag about 4 feet long and heavy-looking – we joked it was where Dave kept his nunchuks, bo staff, and katana sword. In reality, though, it contained far more powerful devices – devices that would allow us to measure and map the ground surface of the community pond with deadly accuracy.

The true contents of Dave’s bag were an autolevel (a monocular scope used to view and establish points on a flat plane), a tripod on which to put this level, and a 5-meter tall collapsible pole to view through the level. By placing this pole at any given location on the ground, we could look at the pole through the level, read off the number we saw there, and thus establish the height at which the level stood above that point on the ground; i.e., we could see how much lower that point on the ground was from the height of level. Doing this multiple times in several transects across and around the pond, we were able to establish a grid of points recording the ground height of the pond and surrounding area. This survey, which we completed over the course of two days, was one of the most critical activities of the trip, as the only other elevation data available to us was satellite-measured data from NASA, which we knew to be not nearly as accurate as our manual measurements.

While we surveyed we had lots of help from the community. An older man, named Sareio, and a younger man, Mdeza, greeted us each morning and did our work with us around the pond. We walked the perimeter and surrounding area with them, told us the history of the pond, and showed us sisal plants they knew they could use to stabilize top soil. This exchange of information was very helpful, but there’s a different moment from our surveying activities that sticks out in my mind. There was a moment when I found myself watching a Maasai man, dressed in his traditional checker-patterned fabric, peering through the autolevel at the pole. It was Mdeza, and he came away from the autolevel with a smile on his face. That’s when it hit me just how collaborative this project had become, and I was proud.

I was proud we weren’t just coming in and doing the work ourselves, but that we were connecting with the community - listening to them, learning from them, and hopefully giving something back too, even now before work on the pond had even begun. That’s one of the remarkable things about the EWB organization – their commitment to community engagement. I’ve learned that this investment on the part of the community is a critical element to ensuring the sustainability of a project. I look forward to returning to work with the community in the future, as I now know the best solution to fixing this pond will only be found by our continued collaboration.